The road is smooth, it’s warm and wet, the moon is hidden behind a blanket of cloud, and punctuating the translucent summer night are thousands of fluttering points of light.

Juneathon is still in full effect – been having a great month.

Stopped by the church on the way home this evening for a work night. We’re a small (~200 parishioners) church, and there’s a group of four of us who’ll get together on a Friday evening about once a quarter to fix stuff that’s broke at the church. We’re mostly engineers or management technicians, but it’s nice to use some tools, sling some paint, and do some actual work once in a while.

After we’re done working, we’ll swing by someone’s house close to the church, have supper, and sit on the porch for a while watching the world wind down.

Biked to work today, and over to the church this afternoon for work night. Stayed for supper, and had a preview of heaven climbing up Flanders road on the way home – still air, smooth pavement, turning circles, and fireflies dancing in the night. Full belly made the ride slow. Barley, hops, and yeast made the night smooth.

New England Summer at its best.

Earlier this year, I talked Melissa into letting me buy her a bike. She acquiesced with the caveat that I had to ride with her until she felt comfortable on her own.

Spend time with my wife? Twist my arm… Sunday Morning, we’re up at 6, on the bikes, and miles squeaking by under our tires. It’s a truism around here that, if you want to climb, pick a road with ‘Hill’ in its name, and we did.

20 miles and a bit over an hour later, we’re rolling back into the driveway to get ready for church. The big son learned how to make crepes this week for French class, so this was waiting for us: Half day at the office. Didn’t bike in, ’cause my hope was to get a bike ride in with my lovely wife after work. But the meeting went long, and we were up against the kids getting out of school.

So, mowed the lawn and saddled up to pick up the big kid from middle school. Awesome late spring day, great spin down to the school. Picked up the boy, and we headed home via downtown and River Road. And, again, I’m struck by the surreality of my kids’ lives – this is ‘normal’ for them. And I want it to seem normal, but not entitled. But it was an hour of good talk, an hour of spin, and an hour that I’ll treasure for a long time.

It’s still recovery week after the Vermont City Marathon, but the young son looked up at me with his big doey brown eyes and asked if I’d run the short Bluff Point Twilight Trail Race with him. Duh, of course I can.

This is one of my favorite races – great cause in the New London County Women’s Center, awesome course at Bluff Point State Park, and early in the nice weather when being outside is a huge treat after winter breaks. The short course is about 3.8 miles – out to the bluff and back via the hill in the peninsula. Nice two-track the whole way; packed dirt or crushed granite.

The run was awesome. Small son has a great sense of pace, and we started passing folks about halfway. He gutted it up the hills, flew down the downhills, and about blew my doors off when he sprinted for the finish. Nice.

Wife ran with the big son – they flew, both setting PRs for the course. Funny how happy I am being the slowest in the family.

BPTTR rocks for post-race. There’s always corn chowder from the US Coast Guard Academy goat locker. AND there’s massage students from a local massage school hitting their requirements for sports massage. I got the hook-up this year; Stacey completely worked out the residual stiff from Vermont, and I was happy.

Only down side was forgetting to check the tide tables and parking in the lower lot – the tide was still coming in, and I had to wade out to the car. Even I need reminders I’m not entitled sometimes.

My true intent was to head to the Y and do some strength after the kids were put away for the evening. But, the evening was wet, windy, and 55 degrees. The boy had a tough outing at the plate, so we hung out for a half hour after the game, playing catch and throwing batting practice.

Tomato soup and margherita pizza to shake the cold got me ready for bed, not the Y.

Not much to crow about today – three TOUGH miles in the cold and wind. Had no gas, which was fine after the day of Joy i’d had on Friday. Just no gas at all.

So, I’m still fat, still slow, and, relative to most folks who’ll set out to ride 110 miles in a day, out of shape. But, I’ve got a couple of great riding friends, Steve and Tracy, both of whom are disciplined and freaks of nature who wanted to give the Gran Fondo NYC a try this spring. Figured there’s worse things to do than to spend a spring weekend in NYC, and a spring day on the bike.

Plus, you never know who you’re going to run into in NYC. Not sure if the D-O-Double G has moved north, or if this was CSIS: Start was at the George Washington Bridge, 7AM sharp. With the caveat that there was a staging area that closed at 6:15. We stayed on the Lower East Side, 11 miles from the start, so were on the road about 5 freaking AM, riding up Broadway. This may have been my favorite part of the ride – every corner, there were more riders joining us as we headed towards the start. Nice, relaxed pace. Pretty organized getting onto the bridge for the actual start. Kind of freaky hanging up in mid-air over the Hudson. Steve and Tracy are the skinny guys. For the record, I did pee off the bridge. Pretty much by design, this was the last time I saw Steve and Tracy – they were much fitter, and I knew I was going to be slogging over the course. Not often I get to spend a day alone with my thoughts. So, I clicked it into cruising mode, as the climbs were the only timed part of the course. Until about an hour into the ride, when I felt my pedal tug back, then start spinning, and – another cycling first, the popped chain! And, for the rest of the day, I was kind of in catch-up mode. Had to wait about 45 minutes for a SAG, then a ride about a mile up the course to someone with a chain tool and a pin. I was carrying Two spare tubes, CO2, hex wrenches, a couple of zip ties, but had never popped a chain before, so wasn’t prepared for this. Last time I buy a Shimano chain (replaced it this winter) – the link that busted was where the broken pin went in, so it’s possibly mechanic (me) error on the installation. But why fool with breaking pins when SRAM or Wipperman or a couple others have groovy sliding links that avoid these troubles?

The ride was georgous, I was fat and slow. Felt pretty good heading up Bear Mountain, the biggest climb of the day, but when I got to the third and final climbs, I was popped. Part of it was poor training, for which I was compensating by soft pedaling along most of the flat portions of the course, part of it was the heat – I think the temperature topped out about 85 degrees, and don’t think I’d finished a training ride over 60 degrees all year. Climbing in the shade was pretty OK, climbing in the sun just killed me.

In the end, I met my goal of finishing an epic for the first time since I rode the Houston-Austin MS150 in 2002. It wasn’t pretty, but I did get to spend the whole day on the bike, covered 123 miles between the 110 miles of the Fondo, the 11 miles to get to the start, and the 2 miles across Manhattan to get back to the hotel. All in all, a good day on the bike. 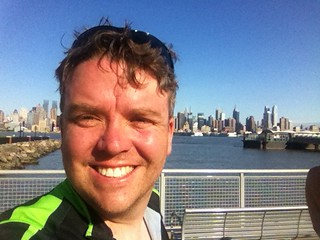 Would I ride it again? Probably not – too early in the season, pretty expensive (register today for next year and it’s ONLY $220), and involves a weekend in NYC that doesn’t involve museums and fine dining. But, like running the NYC marathon, I’m thrilled that I did it.

June. Man, life is good up here in New England. Blue sky, low humidity, morning fog. Lovely. Ought to be like this for another 4 months. Come visit

Still way behind in writing up Gran Fondo NYC and another Vermont City Marathon. But, as this is (theoretically) a running blog, here’s some red meat for y’all: Usually the nail’s gone before race day. I was hoping I’d keep it this year.

It’s the freakishly long second toe – I’ve tried shoes ranging from 8.5 – 10, so it’s not a toe-box matter or something like that – I’ve lost nails from both hitting the end of the shoe and having the toe box fold too soon. Just a cost of doing business, I suppose.