First Saturday of fall, and New England has her moxie back – cold and damp, despite having been hot and humid 10 days ago. Nike+ run club had “speed” work on the calendar in the form of 5 x 400m repeats. So, wanting to get really back in the spin of things, I decided that N and I should ride to the track, run, and then get coffee. So, not really a pure run, not a pure ride, but something in the middle.

So, with fall being upon us, many local riders have hung up the wheels and won’t be seen again until Memorial Day. Making sure to emphasize the change of seasons, Mother Nature made sure it was grey and cold; I don’t think that we passed another rider all day. 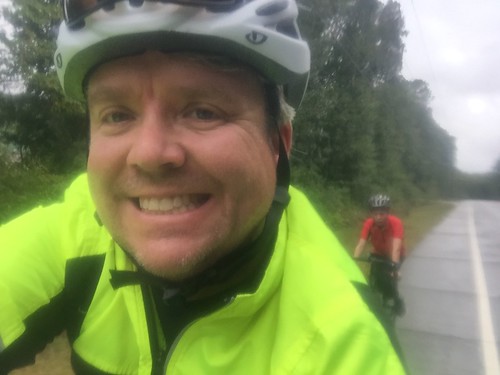 The sky threatened more rain, but that was mostly just bluster. 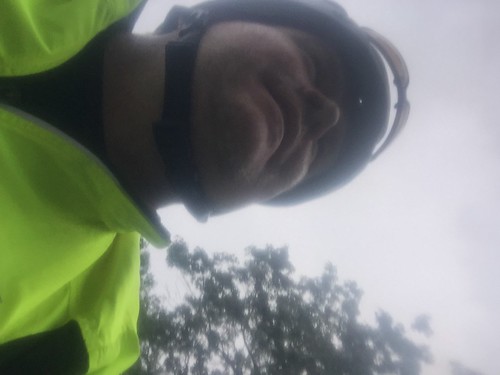 I’ve been riding a lot this summer with #2 son. He’d asked for a real bike for his birthday, and we hooked him up. That, plus me being down a notch this year with Lyme has given us a great chance to ride. At the end of track season last year, he got diagnosed with exercise induced asthma, got an inhaler (we’ve filed the TUE), and has been kicking butt and taking names. To the point where his word cloud project at school was focused on cycling.

So, I kind of strong-armed him into doing a bike-run-bike with me Saturday morning, despite the fact that most of his friends were sitting in their basements playing Density, or some such other game. Bike of choice was the Nashbar Cross bike, since it’s got a rack on the back where I could strap my runners. The ride up to the high school is one of my favorites; hill up to Flanders right out of the gate from the house; long, downhill-ish straight, and one little kicker before rolling into the school. Not a lot of traffic, and a good warmup.

At the track, we stopped, changed into the sneakers, and watched the JV crew gear up for a game. For the 400 repeats, I got a little confused by the Nike+ app until I figured it out. There’s no warmup period; rather, the app starts with the first 400. Press go, and it starts timing the interval. Press stop after the first interval, and the recovery timer starts, then press go for the next interval. Didn’t figure that out for a while, possibly due to my heart trying to escape my throat. 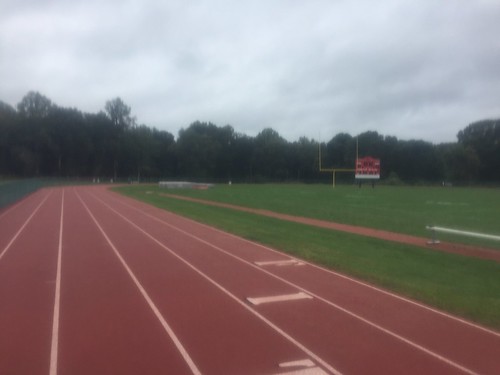 So, I’m not much of a speed guy. I’m not much of an endurance guy either any more, but I’ve never really claimed to be a speed guy. I’ve dutifully avoided the track for most of my life, with the exception of twice a year during my Navy days running the Physical Readiness Test – 12 laps a year, like it or not. Today, I got to relive why.

The first 400 kind of didn’t count, since it wasn’t until about 150 in that I realized the Nike+ app had started the rep as soon as I started the workout. N started at the same time as me, and had opened up about 50 meters by the time I realized I was supposed to be going hard, but I caught him by the end of the first 400.

After the first 400, I’d kind of jogged it while fiddling with my phone, and was surprised when the distance started counting up again, indicating that I’d started it. So, I ran that one slightly faster, mostly out of surprise.

After that one, my lungs were trying to climb up out of my throat, probably because that’s the easier way to get oxygen into them, so I decided to extend my recovery period to a whole easy lap in between 400 efforts. N caught up to me again, looked like he was having fun, and said “How many more?” “Only three”, I said, and we crossed the start, and he was off.

For the first half a lap, I thought I could catch him on the back stretch, but the lungs were gasping, I started to taste half-chewed dates (pre-outing breakfast) in my throat, and I decided just to hold on until I was done. Which I did, and after that lap, decided that, not only would i extend the rest interval to a whole lap, but that it was OK if I walked that lap.

The last two 400’s were tough, and I was thrilled to be walking at the end of them. So, N talked XC strategy with a couple of the high school runners who were doing an 800s workout, and I pretended to take my time getting my bike shoes back on. Then, back to the bike!

Our high school backs up to an awesome bit of state park land with some of the finest two track in the Northeast. Plus, the high school is on the top of a hill overlooking the sound, so, with the cross bikes, we were looking at about 2 miles of downhill, which we bombed.

The kid cleaned it, no problem. I had to stop to pick up my running shoes; they were insufficiently strapped to the bike rack, and managed to either bounce off or get stripped off by some of the verdant but dying vegetation covering the trails. Another 4 miles of spinning, and we were downtown, and at the toughest part of the outing: which place to get coffee.

Bartleby’s, our usual, must be on the Fred schedule. It’s the start/finish of several local rides, and there are bikes stacked up outside most weekend (and weekday) mornings. But, in a clear sign that cycling season should be over, the chairs were not outside, and no bikes were leaning against the building. Kind of shocking. So, we stopped at the Green Marble – tougher to people watch, but still had tables and chairs out, and, if I’ve got to be pressed, probably has the best latte in town. 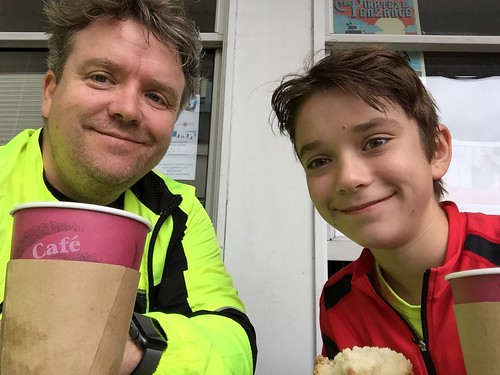