We’d been having a decent bout of spring in New England, largely because I spent a big chunk of the last two weeks on travel. So, of course, it’s got to be nice here. So nice, in fact, that the wife and kids put fans in the windows, and the leaves came out.

Today? Not so much. Friday? Beautiful. This morning? Grey. Not even the grey of a TV tuned to an unused channel, but the grey of limbo. Even the new leaves seemed subdued. You can thank Troop 76, because we’re camping this weekend, and our motto is “Troop 76 percent chance of rain”, with the records to back that up.

I had crap to do first thing in the morning, and didn’t get out to ride until about lunch, at which time the grey and misty morning had turned into grey and drizzly if not actually rainy. But, I saddled up the Cannondale, thinking that maybe it was raining because I’d been a New England bike apostate by riding in the basement in front of Zwift all winter, instead of doing my penance in March and April on the salt bike, bundled up against the cold and slush.

I’d like to say transcendence set in during the ride. But I can’t – the ride was cold and wet; the cars sent up spray, and I can’t even pretend to have “early season fitness”; this ride was fueled by guilt and what few dad watts I’ve got left (I think that teenage children may actually drain dad watts).

Neither can i say I was sad to ride today. There was value in the cold rain, and reality in the painful joy of hot water on cold flesh. I still can ride, I still love where I ride, and maybe not all things good are joyful.

The tale of the scale hasn’t been good. I haven’t gained weight; neither have I lost any. Fitness seems to be coming back, which is good. I don’t think I’m going to die at the Vermont City Marathon relay in three weeks.

And the campout is awesome. The frogs are louder than the scouts; and letting boys self-organize occasionally yields amazing stuff – like the campstove donuts that were embellished with the addition of girl scout cookies and marshmallows. 6 hours of laughter brings light to absolutely any day. Though I do hope that the sun comes out tomorrow.

I did something unusual for me this morning – I got my butt out of bed and went for a ride. River Road, as always, was spectacular. 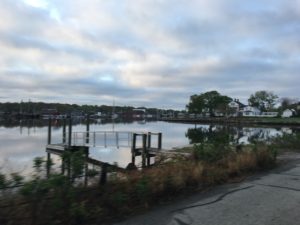 The ride itself was only kinda meh – not feeling strong, but I think this may have been the Cannondale’s first outing this year. Not a huge ride, but the victory was 100% getting out of the door.

On track for this year’s mileage; now to focus on losing weight.