I won’t lie to you. It’s been a bad week running. Which is surprising, since last week was a great week running. But, I’ve got to face facts – I’m not a cold weather runner.

Last week ended well – huge mileage biking and running for a January week. 20 miles on the bike on my way home from work Friday afternoon despite it not being above freezing. Then a Boy Scout campout that I convinced myself I needed to go on ’cause I was making my kid go on it. 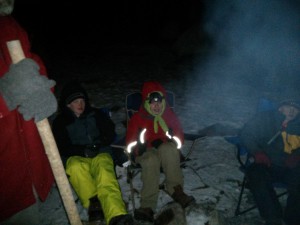 But even at the scout campout, I ended up squeezing in an almost 6 miler. Life was good.

Then, MLK day came and went, and I didn’t take advantage of the beautiful weather. Then the cold came, work got busy, and I sat on my butt for the week.

This morning, I ran a bunch of errands while my wife re-organized her office. Got the stuff to refinish a coffee table and a couple of other projects, banged them out. Then, looked at the clock, saw it was 3 and the stain was on the coffee table, and headed out the door.

I’m not lying when I say that the first two miles were uphill into the wind, ’cause they were. Absolutely have to love that. Turned around, and it was much, much better. Almost survivable.

But, broke the zero, didn’t have a week with nothing.

Diet’s going better – tipped the scales pretty consistently under 185 this week despite not running.