So, I think that one of the really positive outtakes from “Muscle over 40” for me has been just a little more desire to be active. And this week’s “Fitness and Freshness” shows a pretty strong uptick: 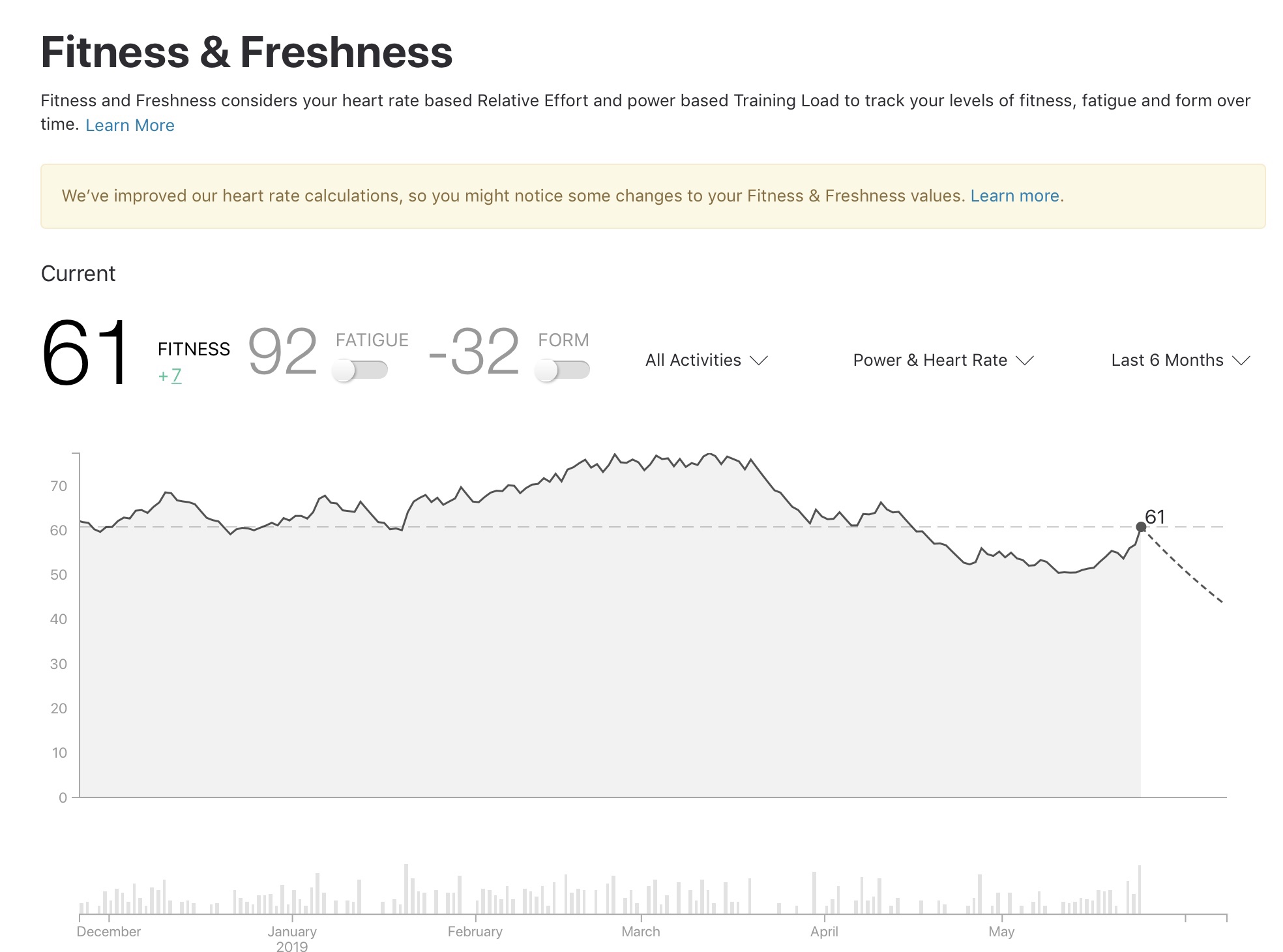 I’m finally back to where I was at the beginning of April, when I stopped running for a while due to a gimp ankle. The ankle’s feeling much better.

Today was a day off. Originally, I thought I was going to study, but there’s some local drama going around, so my sleep game has been off. Plus, the kids went off to work and school, and Mrs J looked at me and said “Wanna go?”

“OK”, she said, and tossed my running shoes at me. Let’s go.

The run was strangely, strangely good. Which either means I’m about to break again, or that I may actually be getting better. Short run, just a couple miles.

After the run, it was on the bike again, down River Road, soaking in the light and air, and just kind of being joyous. It was weird being on River Road during the part of the day when most folks are working – most Saturdays and Sundays, it’s tons of “Always Wave at your fellow cyclists who you see out there on the road“. But this time, not so much. Like two other cyclists. On the other hand, the fishermen under the IH-95 bridge seemed pretty friendly, though Narragansett tallboys at 8 AM will do that for you.

Workout at the YMCA was humbling. Lessons learned:

DOMS* is most definitely a thing

Cut out of work early today. Beautiful day, so instead of just stoping at the gym on my way home, I went home first, and rode the bike to the Y.

What a time to be alive! The ride was awesome, but it usually is – down hill from the house, then a cruise down River Road, through downtown, and stop at the Y. The Mystic Y is about 6 months redone, and it is amazeballs. Lots of natural light, and, a decent number of people. Felt good to be using something other than the pool.

Regardless, today’s activity was harder than Day 1. Not sure if it was residual tired from Monday, or if I used weights that were too heavy, but I’m pretty sure that it really was some muscle groups I don’t usually hit. Doesn’t matter, because I got ‘er done.

Rode home up the other side of the river, stopped at Kelley’s Pace for another ankle brace. I think the leg is mostly good now, but i’m going to keep using the brace as a prophylactic probably through the end of the calendar year.

Pshew. Run tomorrow and Friday, rest Saturday, and then do the flyaway leg of the Vermont City Marathon on Sunday. Life is hard.

One of the glories of being a reasonably successful and financially secure professional is that I can indulge in buying bad books that generally sit on the bedside table collecting cat hair.

Latest case in point might end up being Muscle After 40: Build Your Best Body Ever in Your 40s and Beyond. It came in over the weekend while I was on the bike, and I did the first workout on Monday. Initial impressions:

The 12 week program is divided into 3 parts: First, it’s “Full Body”, which I think is mostly getting slugs like me into the bodybuilding parts of the gym. Second is Upper/Lower, where the workouts will either focus on the upper body or the lower body. Finally, it’s “Push-Pull”, which focuses on the whole body again, ‘cept better.

First workout was in the books. I kinda screwed up and did it as a circuit instead of straight sets – still sweated. My guess is that I’m probably best just resting today and then going to the second day.

Workout was good. Eating was not good – little bit of stress snacking in the AM. Weight is down slightly from where I’m redrawing my peak, but still 20 lbs above where I consider myself fat but healthy.

Spring may finally have arrived in southern New England, though, as has been characteristic the last few years, we’ve gone straight from a disappointing winter into early summer, apparently somewhere between Friday afternoon and Saturday morning.

Friday, I finally said “Y’know what? I’m a cyclist. Why aren’t I riding my bike more?”

“But I live in New England. Possibly the only place on the planet with weather that can make a person whinier about the weather than old England. There are places where it is much, much warmer. And places where it is much, much colder. Sure, it’s not 75 and sunny all the time, but who wants to put up with Californians? Point is, you could ride outside almost 330 days of the year and be in no risk of the weather killing you. On the other 30 days, you can almost certainly get in a few miles of XC skiing. Bad weather is an entering argument, but shape means you can treasure the amazeballs days. And you can’t get shape by whining.”

“Self, you make an excellent point. Giddyup.”

Friday, I was back from a trip to our Nation’s capital, trodding the halls of power, and weaving my way among the throngs of teenagers from the heartland out in DC to see that socialism can actually build a pretty good lifestyle; that walkable cities with transit are pretty stinking cool, and that robust public support for the arts and humanities provides a really interesting way to spend a few days wandering among the collective artifacts that have shaped our history, our art, our sense of self, and our technology.

Mostly, tho, it looked like almost any middle school outing – the adults pretending that they had a shred of cool; the children actively ignoring anyone over 18, the vendors trying desperately to pry hard earned spending money out of the kids’ wallets in exchange for red, white, and blue trinkets made in China.

But the runs was good. It’s been a while since I’ve been able to say that without hesitation; this week felt like a breakthrough. Cranking out 6 on Sunday, and hopefully running one of the legs of the Vermont City Marathon Relay next weekend. Woot.

Enough running, tho. What I really want to talk about is the bike.

There are few things quite so transcendent as the first few rides in the spring, regardless of one’s state of training coming out of a deep winter. The combination of the turn from grey of deep winter, to the brown of mud and very early spring, to the first hints of color from the daffodils and tulips, the first greens from the skunk cabbage and elephants’ ears and fiddleheads. The sounds – the first spring peepers; the hoot of the owls, the deeper ribbets of the leopard and bull frogs, and the terrifying screeching of the fisher cats. The smells – from the damp of melting ice and snow, the earth as it starts to wake, the dead skunk that’s been under a snow pile or frozen mid-puetrificaiton for six months, and finally the flowers and grasses, and blooming trees – amazing.

Then there’s the transition of bikes – last ride on the winter bike, with the bullet proof tires to ensure that cinders don’t end your ride prematurely with a tire change in freezing rain (or a call to a significant other, more likely). The first time when you, against better judgement, take out the summer bike, with the good wheels and tires out on roads that might not be completely salt and cinder free and feel again the joy of a beautiful bike under your seat…

I’d made that first ride on the good bike back in April – we had a couple weeks of steady rain, with one 40 degree sunny day that fell on a weekend. I could tell that the fitness wasn’t where I want it to be, but the bike absolutely did not let down.

Fast forward back to this weekend. Friday, my afternoon meetings were cancelled, and, well, I cashed in some hard earned leave in order to ride my bike around Newport.

The ride was, actually pretty good – breezy and cool, but not cold. Shorts, wool jersey, and wool undershirt kept me pretty comfy. I’ve been letting my hair grow – managing bangs that stuck out under my helmet was more of a PITA than I anticipated; but partly, I didn’t want to stop in order to rearrange my helmet.

Having ridden around Newport for a while, I’ve gotten pretty good at reading the winds, and figuring if I should do Ocean Drive counterclockwise or clockwise. Today was a counterclockwise day, which meant I started out by heading through downtown. It’s the start of tourist season, but the road improvements aren’t yet finished, so closures and construction made it a bear. 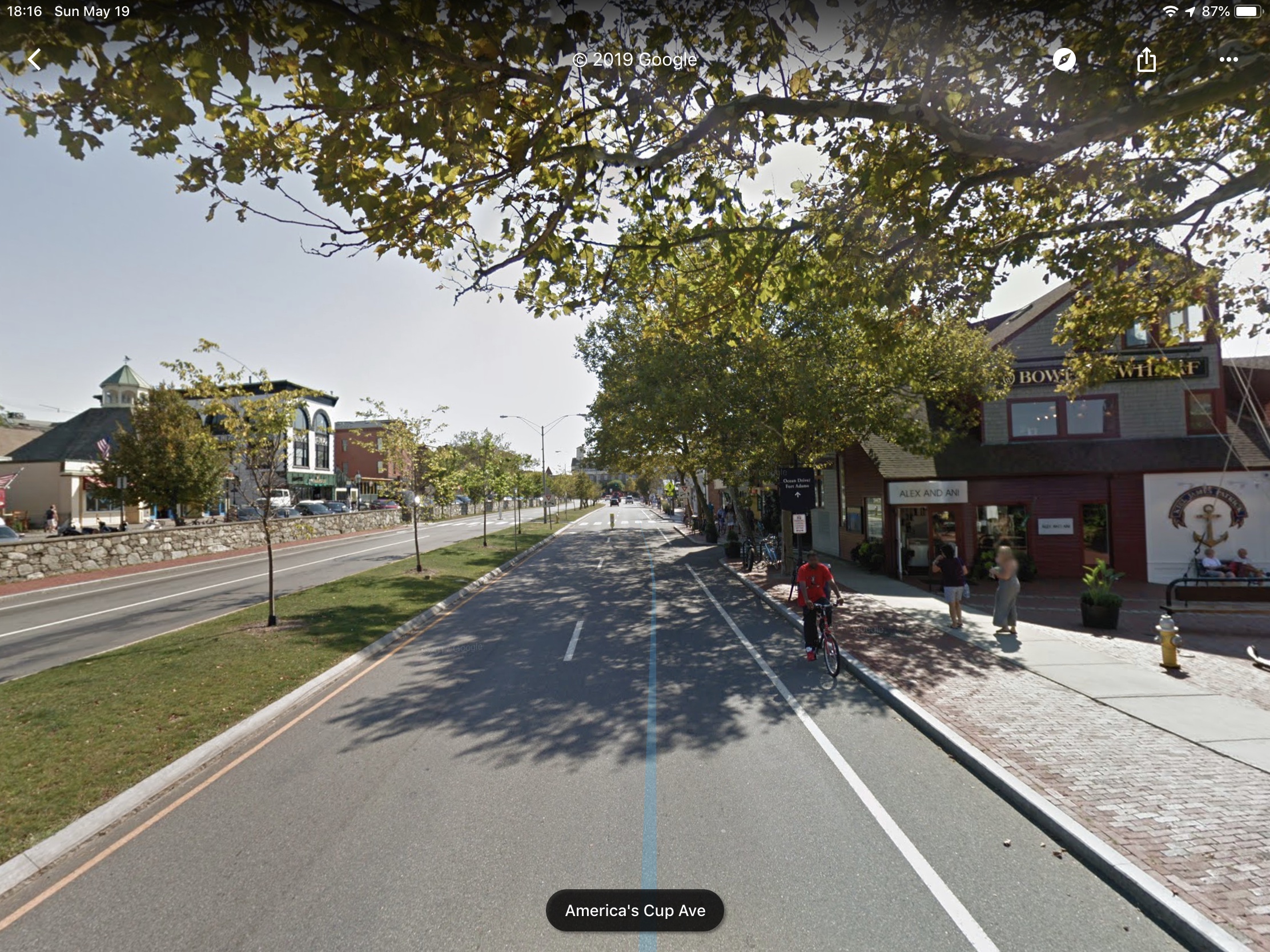 I’ll also never quite understand why the middle of downtown is a two-lane, dead straight, divided highway for like half a mile, with only two pedestrian crossings. This is not shared-use friendly design. Were I on the Newport town council, I’d open every meeting by proposing cutting this down to two lanes, and relclaiming the other half for mixed-use commercial/residential to help out with the bike-able/transit housing shortage for both Salve Regina and the NAVSTA.

Anyway, fought against the wind until I hit Brenton Point State Park, then crushed it eastbound on Ocean Ave. The one gripe I had was the dude on the e-bike who stayed JUST out of touch – wished I’d caught him to have a draft on the way back.

When I hit the end of Ocean Drive, I thought about going back, but a mile into the wind on legs that aren’t yet accustomed to riding, and I turned around, rode past the Gilded Age 1.0 mansions, wishing that the robber barons of today had the common courtesy to place their unbalanced gains on such public display, and took the short way back home. 21 miles and happy.

Saturday was like the actual day of summer that we’re going to get this year, apparently. Fortunately, our troop had enough adults at the Zombie Camporee that I was able to break free for some miles. Reminded me of EVERYTHING i love about riding in eastern CT. Highlights:

Chris Case had a pretty good bit capturing much of this in a reprint at the end of this month’s VeloNews. You get to read about it, I get to live it.

Anyway, enough. Got three weeks to finish up school for this quarter, and, as always, I’m way behind the eight ball.

OK, so Nike+ told me to run four times this week. Two down, two days of weekend to go. I’m not going to declare success on that yet, though the two runs I did do were pretty satisfying. Legs felt good, mileage is where it should be, ankle hasn’t felt blown out since.

The minor win I’ll take this week is that I’m 5/7 since last weekend on at least logging breakfast, lunch, and snack meals, including two days where I even logged through supper. Most of those days I was near my target calorie deficit to put me near one pound/week loss; which was OK. Yesterday, we stopped for beers and nachos after work, but I kinda skimped on supper, though I did get a small cheeseburger with #2 kid on his way back from track.

So, not a perfect week eating, but the goal of getting tracking going was accomplished, and I’m on track for being reliable with exercise. I’ll take a narrow win, declare victory. Tea and medals to follow.