Sorry, it made me chuckle. But then, I’m a math kind of guy.

I really did intend to post east coast sunset pictures tonight to do kind of a dueling banjos kind of thing with Jeff, but I cannot find the cable to connect my camera to my computer. I’m not quite sure the pics from tonight are going to come out, but it doesn’t matter. Not one tiny bit.

I’m still a little strapped at work, but my head’s above water, not just my nose. I’d only done one extra night at the office, mainly because I needed to decompress a bit, but also because I got a revised schedule that does not include my getting a peptic ulcer. I was going to head straight to the office late this afternoon after I finished up with my client today. But, it’s drill this weekend, and supposed to rain Saturday and Sunday again to boot, and the grass has been growing like crazy. So, I swung by the house to chew on some pasta salad and cut the lawn. The lawn ended up being festive – the five year old was chasing me, then running away when I’d swing around for the next stripe, and baby and mommy were playing in the swing. Finished up (ahem, you ran out of gas with about a quarter of the back yard to go, says the wife) at bathtime, and while Missy went to tuck the kids in, I headed off to the office.

Via Bluff Point. I got to the parking lot just as the sun’d gone below the horizon. Hit the trail toting just the camera. And almost instantly felt just plain good.

Everything Tuesday’s run was, today’s was the exact opposite. The muscles felt loose, the ground was rising up to meet my feet, my breathing was good. Cosmic alignment, I’m guessing.

I’d left the iPod in the car, so had nothing but my thoughts to keep me company on the trails. Oddly enough, my mind turned to music, specifically meter. I’ll preface this by saying I couldn’t carry rhythm in a bucket, and my knowledge of music theory stops after trebel clef, bass cleff, and “This one goes to eleven”. But, while planning this entry in my head, I thought back to one of the runs last year at Pequot Woods where I’d mentioned that jazz went best with trail running, since both involved improvising around a regular meter. In Jazz, it’s called swing; in running it’s called trying not to trip.

Anyway, the thought tonight was in musical development. I started wondering why most “popular” music throughout the ages – rock, R&B, blues, even many hymns – had 2/2 or 4/4 time. The question popped up just as I’d come to a flat, wide section of the trail, and a song had popped into my head, and my feet were providing the bass drum line. Hmmm, go figure – most people used to walk a lot; it’s the rhythm in their heads.

So I started thinking about waltzes. Not sure if it’s accurate, but I associate them kind of with something-teenth century European aristocracy. And I started wondering – maybe they spent lots of time on a horse galloping from place to place. And started hearing and picturing a gallop in my head – front feet, back feet, glide, and hearing how that could work out to be 3/4 time.

I’m sure I’m smoking crack, but it was an interesting thought experiment.

As I came around the point and started heading back to the car, something lifted. I was leaning forward, and somehow, I was running FAST. I did it for a while, and started expecting the usual lung ache, gasping, pounding heart, etc, that I get at this speed, but there was just a nice, measured effort. clearly I had more in the tank. Good stuff.

I’m logging 5 miles for the day since i mowed.

Oh, and it is springtime in Connecticut – ran through some tall grass, and found two deer ticks in the shower.

OH, and to put the icing on the cake: I got a cool, cool, Einstein Brother’s Bagels jersey off of EBay today. Dig the pics: 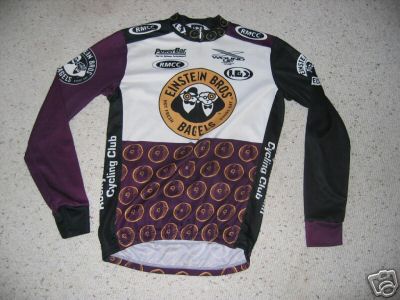