Saturday was an unexpectedly nice day. The forecast called for rain, but, for once, it erred on the side of water, and was beautiful and sunny. Baby was going down for a nap, wife had loaded up the car with stuff for Goodwill, and she says “Hey, why don’t you go drop this off, and stop and run at Bluff Point on your way home.”

Dude, I was on that like stink on poop.

Quick kiss for my soulmate and into the car before she could come to her senses, and I was on the way to drop off our stuff.

One of the downsides of both Missy and I dropping decent poundage over the last year is that we’re both rapidly running out of clothes that fit. One of the upsides is that there’s good stuff at the thrift store. Now, I’m just hoping that someone out there is getting fat.

The run at the point? Absolutely everything it could be. Perfect temperature, legs felt good, lungs felt good. Really no gripes at all. The Nano was firing on all eight, a little Lyle Lovett, little Jamie Cullum, and an unexpected treat in “Sowing the Seeds of Love” from Tears for Fear.

Tell you what – having the Marathon over = huge load off of my psyche. Running’s fun again. Monkey is playing happily in the trees of my brain again, instead of jumping up and down on my back and flinging feces. The buzzard’s no longer perched on the doghouse. AND, Frazz rocked this sunday: 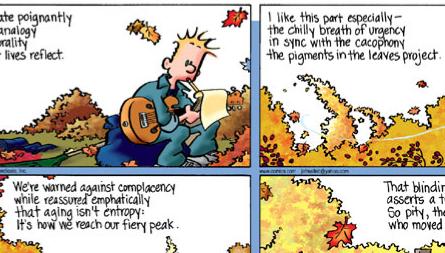 The song lyrics are as follows:

The Midwest’s climate poignantly
describes in sweet analogy
the pace and temporality
the seasons and our lives reflect.

We’re warned against complacency
while reassured emphatically
that aging isn’t entropy:
It’s how we reach our fiery peak.

That blinding blowout brilliantly
asserts a truth we need to see.
So pity, then, the retiree
who moved where autumn doesn’t speak.