To those of you still reading – thanks.

I did 4 miles yesterday on the way home from the office. The catch? I did them at the North Kingstown Rail Trail, and I did them fast. Well, fast for the Fall 2006 version of Jank. The total run was 33:20 for 4 miles; but the first mile was under 7:30! It just felt good to twist the throttle a bit. No negative split, but mile 4 was faster than mile 3.

So there’s 3 runs in my log book in the last 5 days, after a long dry spell in the middle of September. I don’t think I’ve lost much in the way of fitness, but I think I need to make sure to follow the advice in Dromeas (Click here to see to what that’s referring).

Oh, and I’m looking for a tagline a la The Penguin’s “Waddle on, Folks”. Suggestions?

He thrusts his fists against a post; he still insists he sees a ghost.

All is well here – extremely well, in fact. Had supper with an old friend with whom I’d fallen out of touch tonight; am almost above water at the job; and ran almost 8 miles Sunday night, and another 2+ tonight.

Oh, and another for the good column – the annual Oxford American Summer Southern Music Issue came out last week – I’d kind of written off my subscription for the year assuming they’d gone under again. But they didn’t.

Which means there’s much running to do to fully grok the new tunes. Got my skillet good and greasy all the time.

Keep the rubber down. Bev – does this count?

I need to run, too. Been a week. I can feel the tension in my shoulderblades…

So, even though I may have broken Iocelli’s heart, I am scarily happy with the new MacBook. Highly recommend it.

Right now, though, I’m desecrating it – using Parallels Parallels to install WindowsXP. Though every cloud has a silver lining – I’m using the license I bought when I picked up Office Pro for OS X. It included Virtual PC, and an XP Pro license. This hack worked like a champ. The only hurdle was that Microsoft used a Mac-only format on the CDs, so I had to use a USB stick between my iMac and the PC I was using to make the CD.

Oh, that and trying to figure out that the i386 directory is on the WHITE CD supplied with VirtualPC.

But the machine works like a champ. It’s installing XP in a VM on Parallels, playing music in iTunes, downloading the torrent for NeoOffice and Ubuntu, and grabbing a new copy of Second Life to troubleshoot that crashing on me…

Now, all I need to do is start vodcasting and I can be hip and with it.

Well, that and get the RIGHT 120 GB hard drive so I’ve got space for all this crap…

So, the new MacBook is here, and it is GOOOOOOD… The screen is SUPER BRIGHT. It’s faster than the iBook, but I think we’re approaching a point at which speed is somewhat moot.

Huge apologies to one and all – when I got NetNewsWire up and running, there were about 1,000 posts in my aggregator, so I punted. I’m accepting nominations for great rides/runs of the last two weeks – drop me a line.

In other news – Well, I really don’t want to get into the Whole Frankie Andreiu mess. Kudos to him for coming clean about his EPO use in the peleton, but it’s small praise to give seeing as how the relevation makes him more marketable as a television personality.

AND, I’ve been a slug. But the weight’s staying constant, so something’s working well.

BTW – still on hiatus, but wanted to make sure that the Chi folks out there were able to hang out their shingles and start taking clients…

Sorry for the following:

I’m probably out of the picture for the next couple of weeks if not a month. Mingus, my iBook G3, died last week on my way to Maryland. The end of the fiscal year is upon us at work, and I’m changing jobs as a Reservist, which comes with its own learning curve. Plus, I’m behind on a training course, and have a technical class at the end of the month.

What all that means, is that my time to write Runmystic is severely curtailed. I’ll still be turning content for CRN, and still running. But this site will be sparse until I can get all my stuff in one sock, and my new MacBook running smoothly.

Is Get Fuzzy the greatest comic strip ever? ‘Cause I think it is. 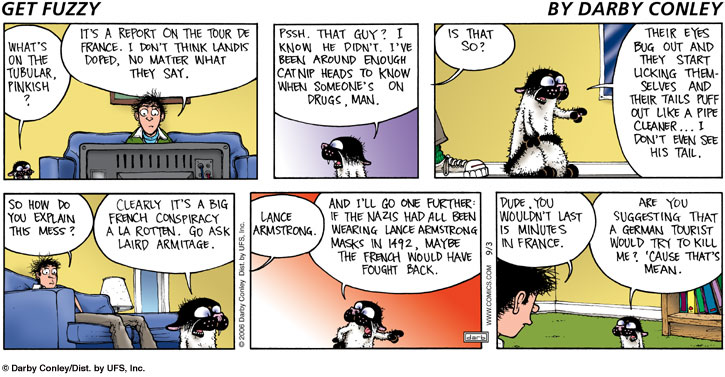 We Want The
Went and saw George Clinton and the P-Funk All-Stars in the second-closest sovereign nation to Mystic tonight. The band was good – George is a phenomenal showman, as was StarChild. The horns? Not so great, but it was easy to mentally edge them out in memory of some of the great horn sections of the past.

More interesting than the show (I’d have never thought it possible to eclipse the Starship until tonight – either I’m getting old, or sobriety is changing how I see the world) was the crowd. There were the expecteds – hipsters bobbing up and down (Hipster guys hanging with hipster girls, always), white guys with dreads and goatees (no girls…), folks who were hipsters 30+ years ago when the band was playing “Flashlight” for the first time, and, being a casino, a goodly number of folks with absolutely no interest in the show at all.

My favorites were the folks who (and I’m terribly afraid I fall into this group) were the ones in that ackward age between hipster-dom and mid-40’s who appeared to be considering the show much as one would approach an installation in an art museum. From time to time they (I) would realize they (I) was actually at a show, and bob up and down for a while, or wave their (my) hands or clap, but then turn back to the patented Gen X look of sardonic detachment. What a drag it is getting old.

Good show – I highly recommend it.

It’s been a week since I’ve run. An actual, honest to God, week. I thought I was going to make it out today at lunch, but the battery in the Subaru croaked last night when the temperature went all the way down to like 50. I jumped it; the car made it to work, and wouldn’t start up again when I had to run an antenna to a photographer. So, lunch was a trip to the auto store and a trip to the pizza buffet.

Work’s been busy, busy; life at home has been busy. Not franticly busy where I really, really need a couple of minutes each day so I force myself out the door, but busy enough that it makes sense at the time to skip running, ’cause I’ll make it up the next day. Only problem is the next day is busy, too…

Plus, there’s been a distinct chill in the air up here – it’s been a good summer, but it’s kind of depressing to see it on the downslope. Fall is wonderful, but I’m not looking forward to December.

Epilogue
I’m writing this on a beautiful cool night on my deck, citronella candles burning even though it’s way too cold for bugs, and the dog sleeping under my chair. Last week’s PHC is playing over the WiFi (The Hyena Stomp, give it a listen), and I’m going to have two beautiful boys bouncing on me at 7 AM, not a minute before, not a minute after.

This is the first day of a new month. I’m still under 170 weight-wise, and have a month before the PRT. I can break 9 minutes on the mile and a half, and get under height-weight. I can work up to 30 mile weeks. And my wife loves me.

But sometimes, life is better given a chance to vent.

In no means wishing to defend him if he did dope back in ’04, but Tyler Hamilton is getting screwed in 2006:No world’s or ProTour return expected for Hamilton

When the ProTour was created last year, the Ethics Code mandated outright two-year competition bans for first-time offenders and an additional two-year penalty before being allowed to return to a major ProTour team, a rule that essentially doubles first-time bans. A second doping offense results in a lifetime ban from the sport.

If he’s done his time, he’s done his time. From what I understand, he’s still been complying with the out of competition testing requirements, and has spent a schwack-ton of his own dough trying to fight his suspension.

Let him ride. Test him, just like any other rider.

But don’t be petty and blame a guy who may have screwed up two years ago for problems today. If you’re going to do that, you may as well nail David Millar to a cross while you’re at it…